In the annals of popular music throughout the world, it is difficult to find a single figure who has had as much influence in the forging of a style as Edilio Paredes has in the creation of bachata. Recording the lead guitar on “many more than a thousand” tracks over three decades, Edilio shaped a new genre; his arrangements distinguished bachata from the bolero out of which it emerged, and set the framework within which bachateros continue to operate even today. From bachata’s seminal days until the early 1990’s, Edilio Paredes directed and recorded the most important work of the music’s most important artists, and along the way inspired three generations of Dominican guitarists.

From infancy, Edilio has always been a prodigiously talented musician. He is a native of the small country town of La Galana, near San Francisco de Macoris, and was the first person in his family to sing or play an instrument (although his brother and his three sons have since become well known musicians in their own right). Nothing in his family history or background augured for the appearance of a musical genius. Nevertheless, Edilio relates that the first time he played a guitar was when he was four years old. “The owner of the colmado had a tres, and he put it up on the counter. I remember having to stand up on my tiptoes to be able to reach it. I’d never played any kind of instrument before, but I was able to pick up three merengues that were popular at the time.” Perhaps seeing a young child play the instrument that he was unable to play incited jealousy in the owner of the colmado - he became infuriated one day after Edilio broke a string. This left quite an impression on the gentle Edilio, and at the tender age of four the great master of the Dominican guitar swore off music forever! 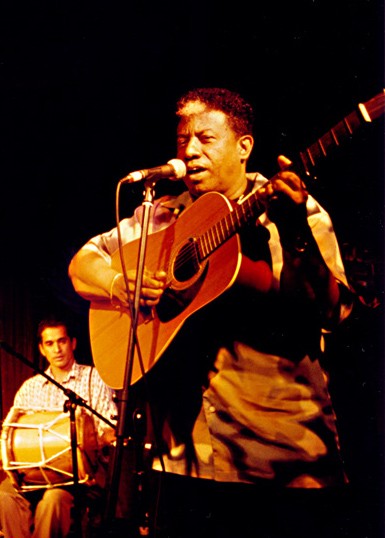 By the time he was eight he had seen more of the world (he reports crossing the river to nearby San Felipe), and he repented of his decision. He formed a group with his brother, Nelson, and Ramón Cordero, who would go on to be a major figure in bachata as well. They began to play at parties in the area with a guitar that an uncle of Ramón’s gave to Edilio along with some basic instruction (Edilio is largely self-taught). Edilio recalls playing the music of Odilio Gonzalez, Julio Jaramillo and Blanca Iris Villafañe, and dreaming of one day being able to play as well as Puerto Rican legend Yomo Toro.

When he was 13, Edilio decided to go to the capital, Santo Domingo. He went to work at Casa Alegre, which was a music store owned by singer Cuco Valoy. Valoy also owned a record label, and Edilio went to work recording for him. He recorded songs with singers Bernardo Ortiz, Rafael Encarnación and Mélida Pérez, and his reputation began to grow. He quickly supplanted a number of older musicians as the most sought after guitarist to record “bolero campesino”—what would later become known as bachata.

Soon after Edilio began to record for Radhames Aracena, the proprietor of Radio Guarachita. Aracena’s station was the only national radio station which featured guitar music, and the music the station played was all recorded under one of the various labels which Aracena himself owned. It was during the years of Radio Guarachita’s predominance that bachata properly began to coalesce as a genre. Every bachatero in the country at one time or another probably recorded for Radhames Aracena. Since he was Guarachita’s premier “requinto”, or lead guitar player, all of those artists except for the few who, like Luis Segura, played their own lead guitar, worked with Edilio Paredes.

As the years went by bachata changed markedly. Whereas it began in the early 1960s as a music which was barely distinguishable from the bolero that came before it, by the mid-1970s bachata was beginning to become much more rhythmic and danceable. The güira replaced the maracas, a change which Edilio was party to, and elements of other more upbeat musics like son and merengue could be heard in the guitar lines. The one person who most influenced these changes was unarguably the one who was making the arrangements—Edilio Paredes. During this period his name was most closely linked with that of his childhood friend, Ramón Cordero, but he did important work with almost all of the major bachateros of the 1960s, 1970s and 1980s. Besides the substantial ouvre of classic songs he recorded with Marino Pérez, Bolívar Peralta, Leonardo Paniagua, and José Manuel Calderón, among others, Edilio also released a good deal of his own work.

To have a conversation with Edilio Paredes about those days is to take a glimpse into bachata’s history through the eyes of an intelligent, critical and uniquely well informed observer. And the story we see is at times a difficult one to look at. As the genre developed, it became increasingly marginalized by Dominican society, until bachata’s creators and their audience became, for a time, a despised group of people. The reasons behind this are complex and best dealt with in another context. They certainly included, however, the active efforts of the merengue industry to eliminate bachata as effective musical competition; an elitist and modernist tendency which associated guitar music with the “backwardness” of the countryside; and, later, a puritan reaction against the double entendres which became a staple of the music during the 1980s.

Happily the situation has changed. As a result of a variety of factors, bachata’s popularity grew steadily during the 1990s, and it has become arguably the most important Dominican musical export, threatening to eclipse the much longer established merengue. Bachata’s audience extends throughout Mexico, Central and South America, Europe and the United States. Young groups have pioneered a fusion of bachata with rock and R&B, while a more traditional style continues to thrive. Among those who are driving the success of the music are Edilio’s three sons, David, Samuel and Nano, all of whom are themselves tremendous musicians.

In spite of the current bachata vogue, Edilio Paredes still does not enjoy the esteem in his own country that one would expect. Whereas cuatrista Yomo Toro of Puerto Rico, Edilio’s childhood idol, and tresero Francisco Repilado (Compay Segundo) of Cuba are cultural icons in their respective nations, the complicated relationship of bachata with Dominican culture has relegated its greatest virtuoso to the margins of society. The musicians who have benefited from bachata’s recently achieved popularity readily acknowledge their debt to Edilio, and on any given night his audience might include some of the genre’s marquee names. Likewise, those who were aficionados of the music when it was being actively denigrated by the Dominican media know and recognize Edilio Paredes as the master musician he is.

With the entry of bachata onto the international stage, Edilio has found an audience that can objectively appreciate his great artistry. Touring with singers like Super Uba and Puerto Plata, Edilio is introducing authentic bachata to a new group of listeners. Far from the bordellos and cabarets where this music once took refuge, Edilio's pioneering style is being enthusiastically embraced the world over.

Bachata is my favorite style of dance and I go to many concerts. strangely I haven't known the history until reading this article. muchos gracias.