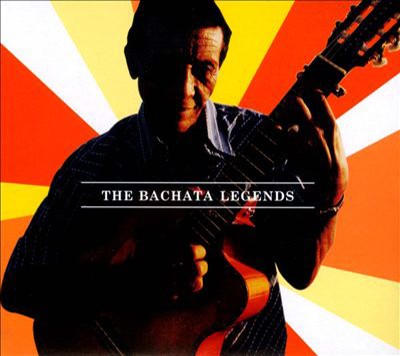 The Bachata Legends unite revered figures from bachata’s storied past. The 2007 release of “Bachata Roja: Acoustic Bachata from the Cabaret Era” (iASO Records) sparked international interest in traditional bachata. The following year, using New York City as a hub, ‘The Bachata Roja Legends’ performed a series of showcases across the United States. In between concerts, iASO organized recording sessions at New York’s also legendary Studio One East. The outcome is a collection of new recordings of these extraordinary legends – delivered with a maturity of spirit and audio quality never before afforded to their generation.

In the early 1980s, Ramon Cordero, Ysidro Cabrera “El Chivo Sin Ley”, Leonardo Paniagua, Augusto Santos, and Edilio Paredes collaborated to create a performance series called “Lunes de Amargue” (amargue translates loosely as the bitter-sweet feeling of unrealized love). The series was successful and copycat ‘Noches de Amargue’ soon surfaced. Bachata began being referred to as “música de amargue”, a term still used today. The amargue series attracted audiences from all classes of Dominican society, and marked the beginning of the end of bachata’s marginalization. The magnetism of these artists is irresistible, and their historical collaboration is now renewed in the Bachata Legends.

Edilio Paredes
Bio: http://www.iasorecords.com/artists/edilio-paredes
The requinto, or lead guitar, is the second voice of bachata. The florid riffs of virtuoso Edilio Paredes, who recorded with almost every major star of pre-electric bachata, established the sound of early bachata. Edilio’s performance always pushes the boundaries – his playing is deeply traditional yet brilliantly innovative. From a country where the guitar is ubiquitous and its masters idolized, Edilio is recognized as the supreme player of bachata’s classic period.

Ramón Cordero
Bio: http://www.iasorecords.com/artists/ramon-cordero
Ramón Cordero began singing in the early 1960s accompanied on requinto by his childhood friend and lifelong collaborator Edilio Paredes. The two became friends when Edilio, at about age 10, began to accompany Ramon’s uncle. Edilio later moved from San Francisco de Macoris to Santo Domingo, where he stayed with (and shared the bed of) Ramon’s grandfather. Ramon followed Edilio to the capital and the two soon began recording together. Ramon’s rustic voice and soulful lyricism inspired a cult following in the Dominican Republic where he reigned as one of the kings of bachata during the 70s and 80s.

Augusto Santos
Bio: http://www.iasorecords.com/artists/augusto-santos
As a guitarist, Agusto was second only to Edilio in virtuosity and has as many hits under his belt. Agusto’s singing career sparked with his 1970s hit ‘Con el amor no se juega’, which remains today one of the most popular traditional bachatas. In the early 1980s, Augusto and Ramón Cordero formed a popular duo, “Los Inimitables”, whose repertoire contains some of the best crafted bachatas recorded in that period. Santos’ sensuous guitar playing and rich baritone combine seamlessly with Cordero’s plaintive tenor. Augusto also collaborated with Cuco Valoy in ‘Los Ahijados’ – a popular son group that is The Dominican Republic’s answer to Cuba’s ‘Los Compadres’.

Ysidro Cabrera “El Chivo Sin Ley”
Bio: http://www.iasorecords.com/artists/el-chivo-sin-ley
Chivo earned his namesake with the 1977 hit “El Chivo Sin Ley” – recorded with Paredes. But it landed him in hot water with a general in the Dominican army who suspected being the butt of the song’s playful lyrics. So Chivo kept the melody and re-recorded it as Bendita nena – but the nick-name stuck.

In the 1970s and 80’s Chivo’s popularity was enormous. On busy nights he would sometimes perform at half a dozen different locals – quickly taxiing between each to be accompanied by a waiting house band.

Leonardo Paniagua
Bio: http://www.iasorecords.com/artists/leonardo-paniagua
In the 1970s, Leonardo Paniagua’s sweet voice and gentle lyrics set him apart from other bachateros, helping to make him the best-selling artist of the period. Paniagua recorded ballad style bachatas, and produced hit after hit for Discos Guarachita and Radhames Aracena. While Paniagua has preferred to keep to the older acoustic tradition of bachata, his soft expressive singing style and romantic ballad-like lyrics have become a staple of modern bachata, a credit to Paniagua’s profound and continuing influence.